Close
Follow us
UK
Case Vejle is the first municipality in Denmark to acquire a Terberg TT223 CC terminal tractor with a hook lift. The custom built terminal tractor from N.C. Nielsen is on the move every day of the week from morning to night, ensuring the internal transport of waste containers at the busy recycling centre, where waste trucks, local citizens and businesses bring their waste for sorting and recycling.

For 30 years, Vejle Municipality has led the way in the sorting of organic waste and even runs the municipal waste trucks on biomass generated from the same organic material. So they also decided to optimise the internal transport at the recycling centre, where two old and worn trucks had been tasked with moving the heavy waste containers:

“We have replaced two trucks with the new Terberg terminal tractor. We were challenged by the trucks’ hook lift, the maintenance costs had become too great and the trucks had to be serviced externally by several different suppliers. In addition, trucks are not built to make small trips around a recycling centre. Our new Terberg terminal tractor has made things much easier,” says Team Leader Keld Winther from AffaldGenbrug, Vejle Municipality’s waste recycling department.

The process of choosing a Terberg terminal tractor was very thorough. In late summer 2018, a new solution began to be considered. The market was investigated, information was gathered and following a search process, N.C. Nielsen was contacted about a collaboration. This led to several meetings, a trip to Balling and the effort resulted in a 1-year lease period, during which Vejle Municipality could trial a Terberg terminal tractor. 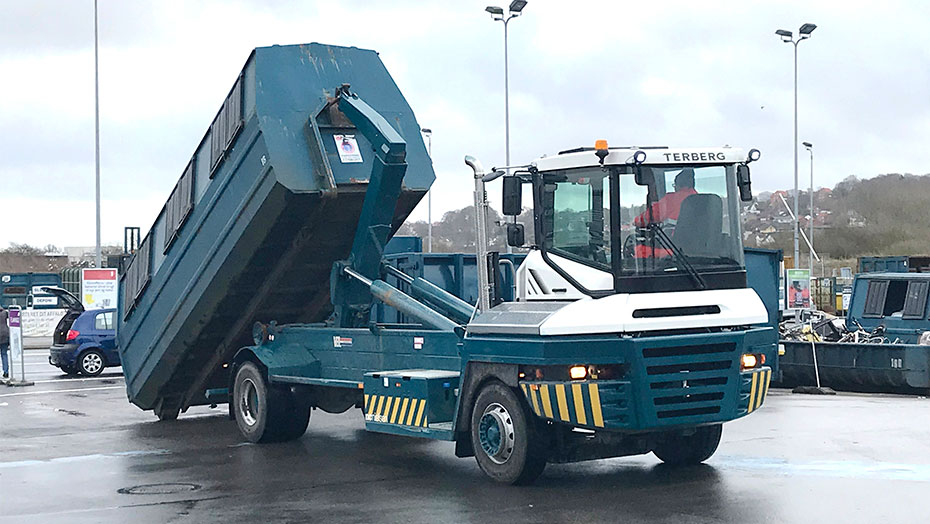 “The trial was certainly the decisive factor. We were impressed by N.C. Nielsen’s approach to finding a customised solution that exactly meets our needs. A solution was developed that included a 30 tonne hook lift, rear bumper, reversible driver’s seat and good driver access. And it’s a bonus that N.C. Nielsen’s service engineer comes to our site when the machine needs to be maintained,” says Keld Winther from AffaldGenbrug.

The new Terberg TT223 CC terminal tractor operates in a driving area of 80,000 square metres, transporting containers between the recycling centre, processing facility and landfill. It runs during the full site opening hours and on 361 days a year. On average it undertakes four transport tasks per hour, which on an annual basis becomes 10,830 movements of waste containers, which can weigh up to 20 tonnes depending on content.

For N.C. Nielsen, the solution for Vejle Municipality is a new chapter for Terberg terminal tractors, which can be adapted for a wide variety of applications. According to Sales Manager Jørgen Peter Lund from N.C. Nielsen, the internal transport of containers at recycling centres and processing facilities is a very exciting area of competence:

“We see great potential for finding efficient transport solutions for recycling centres and waste management in municipalities and companies working in this area. Terberg terminal tractors are a proven technology that can be adapted specifically to these transport tasks, with the hook lift or other relevant container handling options. N.C. Nielsen always offers a complete solution with a terminal tractor, on-site service, documentation and relevant advice.