Close
Follow us
UK
Case N.C. Nielsen delivered a brand-new Linde E30D/1202 forklift to Skave Nedbrydning that is known for dealing with recyclable materials. The Linde truck is the cornerstone in the dynamic company in Skave and was purchased as part of a future generational change where the owners, Lisbeth and Steen Madsen, will leave the company to their sons over time.

Skave Nedbrydning only rarely demolishes buildings. Today, they rather deal with all kinds of recyclable materials for workpersons, DIY people, designers, architects and all kinds of other people who need special building materials which are not available elsewhere. The style is down-to-earth, and there is plenty of room for trailers in the arrival area.

The new Linde E30D/1202 is hand-picked to handle building materials from the company that covers 4 acres of land on the outskirts of Skave. The Linde truck and three other Linde trucks carry recyclable materials in a steady flow to the waiting customers. The many goods are stored in large storage buildings, and the rest is placed in the open with narrow passages between materials.

- We have used Linde for as long as I remember. There is never any trouble, and in case of a strange noise, a service technician is always nearby. We chose to buy Linde because it’s the cheapest solution in the long run, and we would like to have a reliable truck fleet when our sons will take over the company some time. The new Linde truck is an investment in the future, says Steen Madsen, Skave Nedbrydning.

The Linde truck at Skave Nedbrydning is a true all-round truck that manages all internal transport tasks - and it takes a high degree of manoeuvrability, precision and accuracy to drive around the areas. The truck is used when loading and unloading lorries, stacking in pallet racks and as an indispensable transporter truck when carrying heavy and difficult building materials from storage to the customer area.

- I would like to emphasise the hydraulic weight of the truck. It takes no time to weigh the material on the forks, so the customers know exactly how much can fit into their vehicle or trailer. In addition to the normal tasks, we use the truck as a sweeper as we can fit a two metre wide sweeper to clean our driving areas. I personally also love the sound of the Deutz diesel engine - it is music to my ears, says Steen Madsen, Skave Nedbrydning.

Skave Nedbrydning is a family-owned business that was originally founded in the 1960s. Steen Madsen is the son of the founder, Svend-Åge Madsen, and they took over the company in 1998 together with his wife, Lisbeth. Two of their three sons, Anders and Kristoffer, have now joined the company and will carry on the company down the road.

N.C. Nielsen is very pleased with the co-operation with Skave Nedbrydning. It is a good and loyal customer that made a purchase because of previous experience with Linde:

- We would like to do business with our customers more than once. We are very happy that Skave Nedbrydning has yet a Linde truck that matches their needs. They are busy during the week, so they were here in Balling on a Sunday afternoon, and we showed them various models. The decision ended up being the new Linde E30D/1202 forklift that was adapted with optional equipment and delivered to Skave in very short time, says Simon Dige Søndergaard, District Manager, N.C. Nielsen. 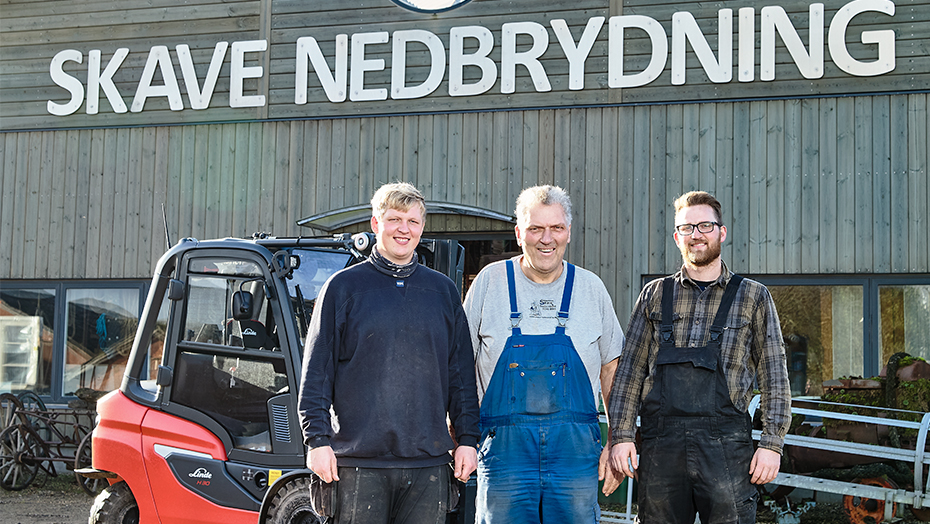